Lankem have supplied dispersing agents for many years for the preparation of pigment dispersions and general coating applications. The main performers over the years have been both Lansperse DS200W and DS80. Both of these have exceptional performance but the formulator now requires additives with better environmental credentials and also improved hazard labelling.

We have developed a range of dispersing agents based on our new BioLoop surfactant technology. These products tick all the boxes in terms of the requirements for modern coatings technology. 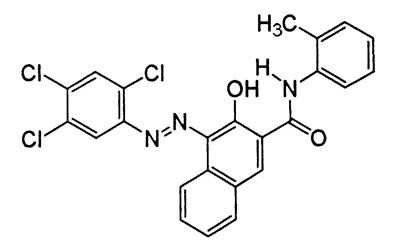 In this blog we look at the work carried out on our new bio-based dispersants compared to our standard dispersant for water-based systems.

The following formulations were prepared by initially mixing on a high-speed mixer and then processed further on a laboratory bead mill. Analysis and comparison of the performance were made in terms of the dispersion rheology and stability and also an assessment of the film properties was undertaken.

The products tested were Lansperse DS200W, a standard non-ionic surfactant type dispersant and Lansperse LT87 a new dispersant based on our patented technology, consisting of bio-loops and tails. Dfoam AR2 is our new defoamer which is a very powerful defoamer/antifoam and the PR 112 used was Sinfast Red 3150-001 (ex Union Colours). This particular pigment has a yellow shade, high strength.

The viscosity was analysed over time using a Brookfield viscometer.

The viscosity profile shows that the new dispersant Lansperse LT87 in these formulations have substantially lower initial viscosity. This can lead to systems with potentially higher pigment loading.

Over a period of time, the one based on Lansperse LT87 gave consistently lower viscosities.

Both Lansperse DS200W and Lansperse LT87 dispersions prepared as above were then mixed into a simple clear Styrene/ Butyl acrylate binder system. This represented a basic paint formulation without any fillers but was essential to assess the relative performance of the dispersion in terms of pigment strength.

Both pigmented paint formulations were cast on the card as follows:

The CIELAB colour space (also known as CIE L*a*b* or sometimes abbreviated as simply "Lab" colour space) is a colour space defined by the International Commission on Illumination (CIE) in 1976. It expresses colour as three values: L* for the lightness from black (0) to white (100), a* from green (−) to red (+), and b* from blue (−) to yellow (+). CIELAB was designed so that the same amount of numerical change in these values corresponds to roughly the same amount of visually perceived change.

The drawdown indicates that for this pigment the Lansperse LT87 produces a coating that is redder (a* 62.54 vs 61.22) and yellower (b* 33.02 vs 29.46). This may be due to a better dispersion of the pigment using the Lansperse LT87, as in previous studies, we have seen that our new BioLoop dispersants tend to give dispersions with finer particle size.

The Lansperse LT87 was added at 2% into a chalk paint, which gives an extreme assessment on the flocculation potential. This is then coated onto the card and the rub test is carried out. Any noticeable increase in pigment strength around the rubbing area indicates the system is likely to flocculate.

As you can see virtually no flocculation is observed in this test.

The new bio-based dispersant Lansperse LT87 gives superior performance compared to the industry standard Lansperse DS200W. These new products give the formulator the opportunity to move to products that are greener, sustainable and a good ecotoxicity profile.

A new dispersing agent for aqueous based blue systems

The next generation of dispersing agents for aqueous pigment yellows